We have all arrived safely at the guesthouse in Tactic. Everyone is a little tired, but that just means that the youth girls have been giggling uncontrollably.
We arrived in Guatemala City late last night and slept at a Seminario Teologico de Centroamerica. Alanna bravely killed the spider that had made its home on my bed. Once this act of heroism was accomplished, we all got ready and went to sleep. Ok…so saying that youth went to sleep is a bit of an overstatement. We all went to bed and after about an hour or so the chortling died down. But then, just as Devon and I were about to go to sleep, two youth girls came through the door into our room to tell us jokes. We did eventually get to sleep…eventually. When we woke in the morning, Devon and I looked into one of the girls’ rooms, and Kira was sleeping while sitting upright and leaning forward on her hand. Go figure.
In the morning we spent a little bit of time in Guatemala City. Les took us on a tour of one of the colonial Catholic churches and explained to us how the Colonials on the sixteenth century blended Christianity with the local religion on order to bring everyone under the control of the Roman Catholic Church and the Spanish king. In the cathedral we visited there was a statue of Jesus on the cross, and Jesus was black in colour. This was an example of the blending of the local religion with the Catholic teachings. The local religion has a deity that is black in colour, and they blended this god with Jesus in order to exert their control and bring people under the rule of Catholicism.
While in the city square we happened upon a parade. Guatemala’s independence day is in September, and the people are already celebrating. There were a few marching bands that went by and many of the participants were teenagers. There were also many venders selling Guatemalan flags. Les told us that on their actual independence day everyone waves a flag in a display of patriotism.
After a short time in Guatemala city we all packed into two large vans and drove through the mountains and valleys to get to Tactic. At one point on the drive, Les pointed to a deep valley through the window and told us that this is where two tectonic plates meet. The two plates converging created a deep valley. The ride up was beautiful. There were so many trees with bright, colourful blooms and many rows of corn growing along the hillside.
All of us were delighted when we arrived at the guesthouse. After two days of spending hours and hours travelling, it is great to be at our destination. Now we’re off to have dinner with Les, Rita, and our house hosts. We’re all looking forward to the adventures ahead. We know God has some amazing experiences in store.

Thank you for all the love, support, and prayers, 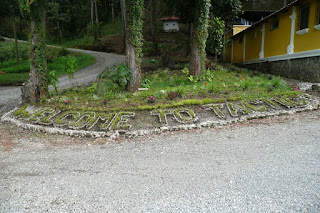